Ground bearing floor slabs are normally found within industrial installations, such as warehouses or factories. However, they can also be installed in all sorts of structures where there is no basement, as long as that ground conditions are suitable.

The design and detailing of these slabs are an involved process, as the interaction between the natural and/or made ground and the rigid concrete floor slab presents challenges in terms of cracking, movement and flatness. The last aspect is of extreme importance to factory floors and warehouses where the plant requires the floor to be extremely flat and level in order to function appropriately.

When concrete floor slabs are cast directly onto the ground they rely on their rigidity and the interaction between the underlying soil to perform as intended. For larger floors there is a need to have joints within them in order to avoid the development of cracks within the floor slab.

Another factor that influences the design and specification of ground bearing concrete floors is the nature of the load that they have to support. If it is non-specific human occupancy for example, it is assumed that a nominal load is applied to the floor and the only criterion is the need to create a relatively flat surface that rests on the ground.

For industrial floors this is not the case, as they typically have to support racking and heavy machinery that is moving or being used to transport items, e.g. via a forklift. In these instances, careful provision needs to be made to accommodate the high point loads and very flat and level floor finish. Additionally, the location of joints within the slab impacts on the location of supports to plant and storage racks. 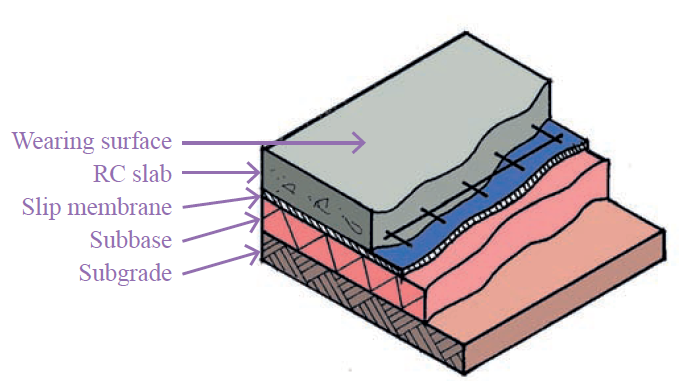 In some instances, an insulation layer is installed. When there is a requirement to have extremely flat and level floors it is necessary to install a two layered ground bearing slab. These have a levelling screed that optimises the ability to create a flat surface. 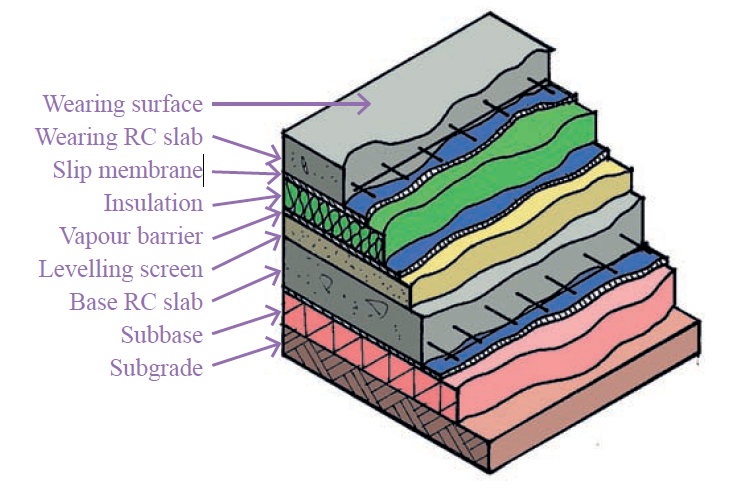 Joints in ground bearing slabs tend to be present for two reasons:

In terms of the buildability, most floor slabs have joints within them due to the limits of how much concrete can be poured in a day. Such joints are known as construction joints.

In terms of crack control, when slabs are reinforced with mesh they are cast in strips and have crack inducing joints that consist of a saw cut and are typically placed at every 6m. These joints combat the shrinkage effects by encouraging the cracks to form in a controlled manner as the concrete slab cures.

Despite these measures it is almost impossible to make a ground bearing slab that is free from cracks, and the only way to treat them is to encourage their path into certain locations. These can then be post-treated with protection measures, such as folded metal channels or plastic caps to ensure their presence does not cause the slab to deteriorate. Joints that receive these protection systems are known as armoured joints.

An example of a crack induced joint. Where a slab is reinforced with steel or plastic fibres, the presence of anti-crack joints is far less likely due to the increased ductility the fibres imbue into the concrete.

Another method of crack control is to install movement joints within the slab. They allow the slab to shrink unimpeded, by creating a joint that can contract in one direction yet maintain lateral resistance along its length. They can also resist vertical displacements across the joint and thus reduce the risks of steps developing.

In instances where the ground slab is exposed to extreme variations in temperature, such as a cold-store or an external slab, it is necessary to install expansion joints. These joints allow the slab to expand and contract as it reacts to thermal effects. Movements due to temperature variation is not insignificant and can go beyond the movements of the slab while it is curing.

Joints need to be protected from vehicle and pedestrian movement or else the concrete will spall and crack around them. Once the slab has sufficiently dried out and set past the traditional 28-day limit, a sealant should be applied to the joint. It is recommended that any treatment of joints is left as late as possible within the construction programme as the concrete continues to set and shrink many months after it is first cast. 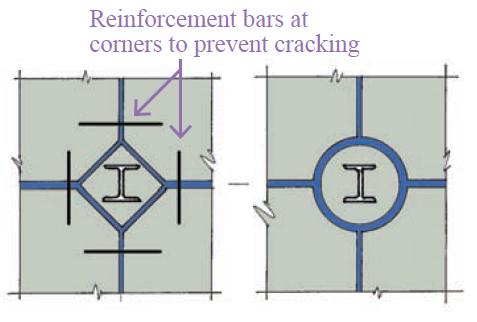 Vertical elements within the structure, such as columns and walls need to be isolated from the ground bearing slab in order to allow for the slab to expand against them without resulting in cracking. By removing these points of stiffness/restraint the floor slab is free to move around vertical elements. The form of isolation is a cast joint that is filled with a compressible material and is typically 10-20mm wide, depending on the predicted movement of the slab. 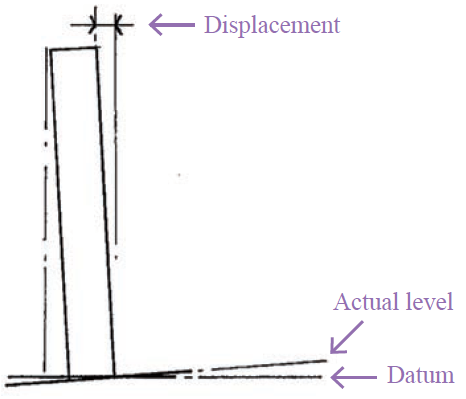 The flatness and level of a floor slab is often one of the most important elements of its installation. In instances where the slab is to be installed into a warehouse with a high ceiling, the plant used to store and access the items within the building are usually very

tall, making their alignment on the ground of paramount importance. If the floor slab is uneven and/or not consistently level, the use of the plant within the warehouse can potentially become dangerous.

To overcome this, the specifier of the floor slab construction needs to establish reasonable tolerances for the slab construction based on its end use. This is normally expressed using two forms of dimensional control, with flatness across a length of 300mm and level expressed in terms of 3m distances between survey points.

It is required that the level of the floor slab does not deviate beyond 15mm from the datum.

There are various types of subbase, which are dependent on their composition and resistance to compressive forces. The soil that the subbase is placed upon also plays a role in determining the capacity of the slab. One of the key variables is the Californian Bearing Ratio or CBR.

When designing a ground bearing slab, the impact on the subgrade material should not be underestimated. This material will deflect when placed under load and as such its make-up determines the performance of the ground bearing slab. There are two ways to model how the soil interacts: one assumes it deflects proportionally when loaded in a similar fashion to dense liquid, while the other has the soil acting elastically by causing the slab to deflect continuously as it is exposed to load.

The most accurate scenario is somewhere between these two assumptions, which makes it very difficult to model. The current school of thought is that the first model, commonly known as the ‘Winkler Model’ is preferred when designing ground bearing slabs. By applying a resilience modulus k to the soil, it is possible to determine the required thickness of the ground bearing slab. The value of k varies from 0.015 to 0.3 N/mm3, and is dependent upon the soil’s resistance to compression.

Steel reinforcement within ground bearing slabs typically consists of a square mesh that is placed in the bottom of the slab with 50mm cover. It increases the ductility of the ground slab as well as provides a tie through crack-induced joints and thus shares the load between segments of a slab. It does not provide much in the way of enhancement for resistance to the effects of shrinkage during curing. It is also possible to use fibre reinforcement to create ‘jointless’ slabs, provided certain conditions are met, such as size of slab and employment of unique curing procedures that reduce the risk of cracking.

Instead of mesh reinforcement, it is possible to place steel or plastic fibres within the mix of the slab to provide increased load bearing capacity as well as resistance to the effects of shrinkage. These fibres contain hooks to increase the bond to the concrete.

The ductility of the concrete is dependent upon the volume of fibres introduced into it as it is being mixed.

The finishes that are applied to the floor slab vary from a simple paint finish, to a screed, to some form of tiling. In many cases the finish is little more than a sealant that is applied directly to the concrete, which has been levelled using a power-float method.

In such instances the timing of the float is important. If carried out too early, cracks will appear in the surface of the concrete.

Applying the finish too late however, will result in the float having no effect on the floor slab. This can result in an uneven floor finish, which can only be corrected by grinding it until it is level.