In order for concrete to crack, there has to be a tensile stress present, be it applied or induced. Concrete is actually designed to crack, as it is assumed that the steel reinforcement within it resists all of the tension stress within the element.

The sight of cracks does cause concern however, and an understanding of what causes them is important when inspecting new works and/or existing structures. 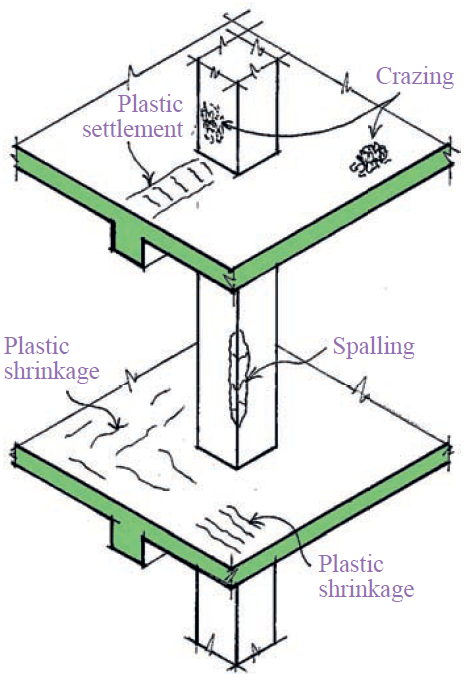 Cracks in concrete can be divided into three categories:

Non-structural refers to cracking in concrete that has occurred due to effects that do not have a significant impact on the integrity of the structure.

Thermal cracks are those that come about either during the curing process (soon after the concrete element has been formed) or from movement of the structure in response to varying temperatures.

Structural cracks are those that appear due to defects in the structure and are considered to be a failure of some sort.

Whatever the symptoms of cracking, the ultimate cause is always the same: the tensile strength of the concrete has been exceeded due to either an induced action or an applied one.

Non-structural cracking can easily be misidentified as structural in nature and in some extreme cases this can lead to the condemning of perfectly sound structures. It is therefore important to recognise that these types of crack are defects to the surface of the concrete, not signs that the element is about to collapse.

In most cases, non-structural cracks can be prevented by employing good practice with regards to design, construction and especially detailing of reinforcement within concrete elements. Where no reinforcement is present, careful management of the placing and curing of concrete is required in order to prevent cracking.

The formation of cracks within concrete elements can be considered from two perspectives. The first is the appreciation of the tensile strength of the concrete element and the extent of its restraint. If it is unrestrained then it is free to expand and contract without hindrance from any other agent.

If on the other hand the concrete is restrained, which is usually the case, a tensile stress develops around the point of restraint, which leads to the concrete cracking. It is important to note that concrete changes over time.

This change in material property affects the elastic modulus of the material and can have an impact on how it responds to the surrounding environmental conditions it is exposed to during its lifetime.

The second perspective is to consider the tensile strain capacity of concrete. This changes over time, because when the concrete is setting, its tensile capacity is very high as it is in a liquid phase and deforms quite readily. As it hardens, deformation becomes more difficult and in

The increase is not enough to prevent it from cracking, hence it being more prone to do so in the earlier part of a concrete element’s existence.

Either way, no crack that is formed in this manner can be considered to be structural. They are occurring due to the properties of the material and the environment within which it is placed. They can however lead to water ingress that can have an impact on the structure by causing the concrete to spall and the steel reinforcement to corrode.

Concrete is designed to crack. Indeed, it is preferable for it to do so in order for the reinforcement within it to be efficiently designed. The

question arising, however, is what is acceptable in terms of cracking? Typically, this comes down to a combination of both durability and aesthetics.

For in situ concrete elements exposed to most environments, the maximum crack width that can be permitted to develop is 0.3mm.

For concerned water retaining structures, the limits on crack widths are reduced to a range between 0.05 and 0.2mm.

There is an issue with setting these limits on crack widths as they only concern the visible crack that is at the surface of the concrete.

There is no recognition given to the nature of the crack underneath the surface, which can widen and spur off into more cracks that are not visible. Without carrying out intrusive investigations, however, it is not practical to determine the exact form and depth of a crack.

Therefore, it is important that:

Cracking of concrete due to settlement concerns how the concrete is placed, and not the movement of the structure as a whole due to the deflection of a support. It is known as ‘plastic cracking’-(Cracks that appear in the concrete 2-3 hours after setting), and occurs soon after the concrete has been poured.

As the concrete begins to set, it is vibrated into place and it is at this point plastic cracking can appear. As the concrete is vibrated the water within it rises to the surface while the heavier elements, such as the cement and aggregates, settle towards the bottom.

A variant of the plastic crack is the shrinkage crack. These typically occur over large slab pours and walls, which can appear within 2-3 hours of the concrete setting. If the concrete is unprotected while it cures it can dry too quickly, due to wind passing over it if it is exposed.

This can result in ‘crazing’, which is a form of cracking on the outer surface of the concrete that consists of cracks that when linked together form small polygonal shapes. Provided the finish to the concrete is appropriately trowelled and/or floated, these cracks can be graded out.

However, there are instances where on the surface no cracks can be detected but instead, they have formed underneath a layer of mortar that has been created by the trowelling/ floating action.

Various methods have been adopted to prevent such cracks from developing. They are primarily focussed on reducing the rate at which the concrete sets. The faster it sets, the stiffer it becomes and thus it has a reduced capacity for tension stress.

Again, it always returns to the key point of crack propagation in concrete, which is dependent upon the tensile capacity of the material. This occurs due to the water evaporating from the concrete. Reducing the rate of evaporation is key to the prevention of shrinkage cracking.

Concrete structures should be allowed to move in response to the varying temperatures they are exposed to during their design life. If they are not, then cracks can appear as the structure expands and contracts, leading to tension being generated in the concrete.

This is more likely to occur in lower temperatures, as that is when concrete shrinks. Where the concrete is restrained it tends to crack as the tension within the concrete exceeds its capacity.

Smaller structures, such as those with a footprint dimension of no more than 50m, are less prone to thermal effects. Larger concrete structures however, do require either additional reinforcement within them or the inclusion of movement joints. These are joints which split the structure into separate structures. The integrity of each of these structures needs to be maintained.

The amount of movement the structure is likely to undergo during its lifetime must be allowed for within the movement joint.

One way to address cracking as the concrete sets is to introduce construction joints i.e. a straight crack. If no continuity of reinforcement is present, then a crack can be generated as the concrete shrinks towards the steel reinforcement. By creating a construction joint, the crack does not appear and hence the integrity of the structure is maintained.

An examples of induced contraction joints, which are a form of construction joint that produce straight line cracks in a controlled manner.